Where Are They Now? 2018 River of Dreams Canoe Sightings

Where Are They Now? 2018 River of Dreams Canoe Sightings 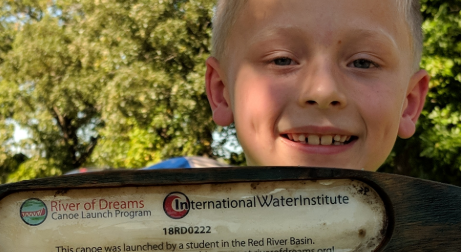 By: Andy Ulven, with contributions from the Education team

With hundreds of canoes now launched annually, reports of River of Dreams canoe sightings are becoming more commonplace, averaging several per week during ice-free months. From discoveries reported near the original launch site, to those popping up after years of silence hundreds of miles downstream, checking these reports is an enjoyable weekly task for IWI staff. Over the course of this past summer, we’ve received reports from most of our 2018 launch sites and a number from launches in previous years. Among the people reporting these finds have been fishermen/women, canoeists, people walking along river banks, MN DOT crews, Conservation Corpsmembers, and Manitoba Public Works employees. A dedicated duo of paddlers, S. Petterson and P. Arlaud, have found dozens of Clearbrook-Gonvick canoes on the Clearwater River. Teachers, IWI staff, and those aware of launches have helped give many other canoes a jump start, freeing them from debris snags immediately downstream of launches. Some of the most interesting reports are highlighted below with pictures.

Sightings from north of the US-Canada border are extremely rare. This August, we were delighted to see a report come in from one of our neighbors to the north. Adam, who works at the St. Andrews Lock and Dam on the Red River at Lockport, Manitoba, reported a canoe found at the dam. Here’s what Adam had to say about finding the canoe, which belonged to a Hawley student and was originally launched in 2017:

“While I was working at removing debris from in front of the dam, I came across your canoe. After recording the info, I released it on the low side of the dam so it can continue its journey. Hope you get to hear from it again.”

At launch, the canoe looked quite a bit different than when Adam found it. Take a guess which photo below is from pre-launch and which one was reported by Adam. This canoe has taken a beating on the mighty Red River, but you can still see traces of the original decoration and color scheme, and the ID is still intact and visible. Perhaps it is in such rough shape because it was caught on the high side of the dam for an extended period of time? Or, did a beaver somewhere along the way – from the Buffalo River to the Red River, through Grand Forks, and across the Canadian border, through Winnipeg and up to Lockport – take a few chunks out? 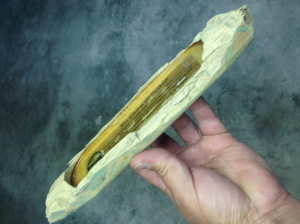 The student’s original dream was the following:

“My dream for my boat is to make it to Lake Winnipeg. I think it will be fun for my canoe to go on this trip. I hope who ever will find it will put it back for me. I hope that it will be nice out and that my canoe won’t get ruined. I think the journey will be fun and scary. I want my canoe to see a lot of animals like deer and moose. My canoe could be found by a little kid and then maybe they will play with it or put it back. I hope that it will see different trees and plants. I also hope that if somebody finds it that they will fix it if it needs to be fixed.”

While the story hasn’t gone exactly as envisioned by the student, at least one of the original dreams are now within the canoe’s grasp. North of Lockport, Selkirk is the last city on the Red River before it flows into Lake Winnipeg, and only the canoe could tell us all the experiences it has had floating the Red River over the past 16 months.

Canoe IDs 18RD0227 and 18RD0222 were discovered by Emily and Austin while exploring the river at Buffalo River State Park. The canoes were stuck on rocks, and had only traveled around a mile from the launch upstream in the park. Thanks to these reports, we know that the canoes are now moving downstream and out of the park. 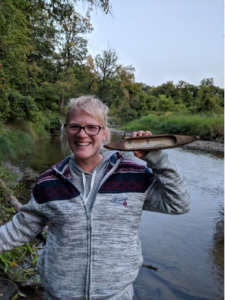 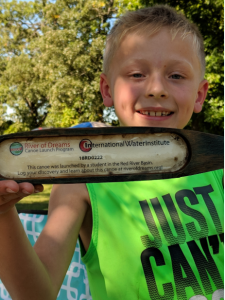 This canoe, launched by a student from East Grand Forks Sacred Heart earlier this spring, was reported north of Oslo, MN, in mid-August by Bradley. According to the canoe’s discoverer, the canoe was caught at a snag in the river, but he took a picture and sent it back on its way, apparently after sharing the find with friends via Snapchat. The canoe’s student must be a big Minnesota Timberwolves fan. 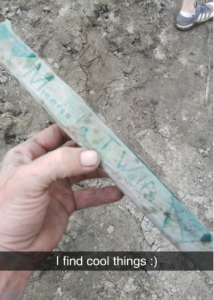 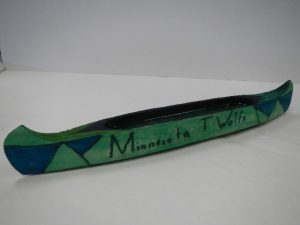 Pictured below, a Minnesota Department of Transportation bridge crew servicing the Highway 200 bridge west of Halstad, MN, reported the following on their canoe sighting:

“The MN DOT Bridge crew from Bemidji was cleaning debris that gets caught on the pier of this bridge and the canoe popped up out of the water just waiting to be found!” 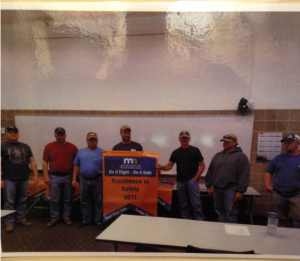 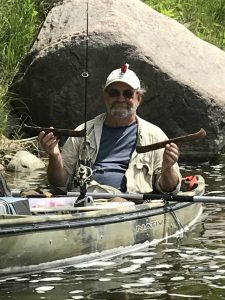 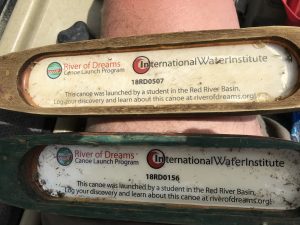 Found west of Fertile, MN, downstream from its launch site at the Agassiz Environmental Learning Center by Liam & Rachel. 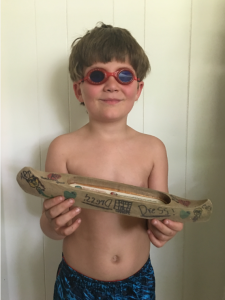 Found by Tom E while catfishing on the Red River in Grand Forks. 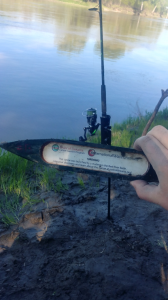