When I tell people about my job, the first thing they ask is “what’s a watershed?”. A watershed is an area of land that drains water into a specific area, usually a body of water. The watershed boundary will follow the elevation of the land, beginning at the highest point and ending at the lowest point, where water flows into a lake/ocean or river. Every river, lake, and stream has a watershed and all watersheds are connected, so wherever you are in the world you are standing within one.  It’s important to learn and understand watersheds because of surface water and runoff. Precipitation that falls near the headwaters of a river will create runoff and flow downstream, where it is deposited into another body of water. Runoff is a source of nonpoint source pollution and could potentially create multiple different ecological problems in the long run.

Our local watershed is the Red River Basin, basin being another word for a watershed. The Red River acts as the boundary between North Dakota and Minnesota and there are roughly 20 primary tributaries that flow into the Red. The headwaters are located near Wahpeton/ Breckenridge and the outlet is at Lake Winnipeg in Canada. The Red River Basin was once a part of an ancient lake known as Glacial Lake Agassiz, which stretched from Saskatchewan, Ontario, and Manitoba in Canada all the way to North Dakota and Minnesota in the US. This ancient lake was the largest glacial lake in North America and was formed about 11,500 years ago and covered roughly 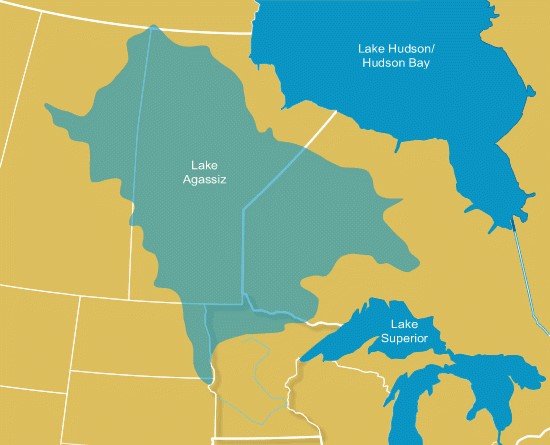 365,000 square miles, which is the reason why we have such flat land and fertile soil here in the Red River Valley. The lake began to form when a glacier retreated from the Hudson Bay and the Mississippi River drainage areas.  The lake was drained and re-formed multiple times before being permanently drained around 9,000 years ago, after the last ice age. Beach ridges are visible on both the North Dakota and Minnesota sides of the Red River Basin as a result of Glacial Lake Agassiz. One of the areas the beach ridges are prevalent is near Fertile, MN and the Sand Hill River. Sand dunes are visible around the area where the beach of Lake Agassiz resided. Taking a visit to the Agassiz Environmental Learning Center in Fertile, MN will allow you to learn more about our unique natural history.

Learning the basics of watersheds and the history of the area is pivotal in understanding water resources and how they can be used sustainably!

To dive deeper into the Red River Basin, check out these resources: