Skunk at the Picnic

Skunk at the Picnic

By Jay A Leitch (IWI Board member) 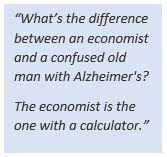 I’ve often wondered why so many people love to hate me. Of course, I’m not alone, since economists are the butt of countless jokes. Let’s assume for this article that it’s not me personally, but me as an economist. I wrote perhaps 600 manuscripts and delivered at least 300 formal speeches off campus during my working career as an economics professor and consultant. I’ve been retired now for 10 years, but I still do an occasional consulting gig.

Many (maybe most) of my professional colleagues, mostly in ivory towers or obscure government agencies, live in a cloistered world of calculus, models, and econometrics. They are learned theoretical scholars, but they seldom interact with people making real world decisions or solving contemporary problems.  They talk to each other using fancy equations and corresponding curves on a graph. Their work, however, is the necessary foundation for applied economics. Applied economists are the ones that take the punches in the real world!

Most of my professional work was as an applied economist. Such work involves interacting with the people who, by virtue of their business or position, make choices on a regular basis. Economics is the study of choices:

Economics is the study of the choices made by individuals, groups, businesses, and public and private organizations to allocate their scarce resources among competing uses to satisfy unlimited wants.

Notice, there is no mention of currency (dollars, yen, or rubles) in the definition. Economics isn’t about dollars, it is about choices, dollars are a handy common denominator.

I’ve often argued that EVERY choice is an economic choice, since the chooser weighs the pros and cons (costs and benefits, costs and returns) of the alternatives. Many choices are quantifiable in monetary terms, but many involve non-monetary pros and cons that also must be compared across alternatives. Choices can be made in the absence of monetary values, but they are still conceptually ‘economic’ choices. I challenged my students/audiences to come up with an example of a choice that wasn’t an economic choice (read the definition again). To this day, I haven’t been presented with such an example.

Here’s where the skunk enters the picture. Without applied economists estimating the value of the effects of alternatives, decision makers are blissful in their ignorance. Once an economist estimates a value, it becomes a situation where knowledge may be painful to the decision maker.

I suspect this pain is the answer to my initial question: why do people hate economists? Because the estimate of the economic value of their preferred choice does not jive with a decision maker’s perception. Often decision makers are certain that an alternative is the best choice, but an economic analysis shows otherwise. Shoot the messenger! The decision-maker not only has to justify their choice in light of economic evidence to the contrary, they have to struggle with knowledge that may be painful to them.

I was once asked to put a value on a large wetland complex in north east North Dakota. I came up with what I believed to be a well-documented, defensible number. When a national environmental group wanted to purchase some of the wetland from a private landowner, my number was ‘way too high’. When the same group wanted the government to protect the wetland, my ‘low’ number paled in comparison to their claim of ‘priceless’.

In short, the economist makes a decision-maker’s life miserable by demonstrating choice A is superior to choice B, when the decision maker is dead-set on choice B. Clearly there may be other factors in the decision that aren’t transparent, such as political reasons or personal preferences.

Go ahead and make fun of economists. We can live with it until you come up with a socially superior way of allocating scarce resources to satisfy unlimited wants. Until you do, applied economics is the science that helps society to get the greatest good for the greatest number for the longest time.