Managing our waters…from the sky?

Managing our waters…from the sky? 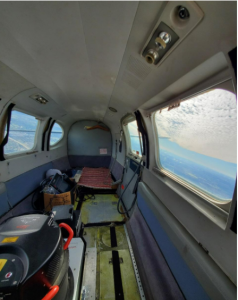 “Show up at 11 sharp- and dress warm.” These simple instructions were all we were given the night before we were set to take to the skies. I woke up the following morning excited, but a little nervous. I thought it was ironic that in nearly seven years with the Air Force I had not once left the ground (“I piloted an office chair” being my response to a question that always seems to come up). Yet here I was only months after joining the Institute, preparing to touch the skies.

At first it may seem like nothing more than a joy ride. After all, why would a couple of GIS desk jockeys need to leave the ground? But this morning was special, it was our chance to get a firsthand look at the technologies driving the Red River Watershed Management Board’s 2021 Red River LiDAR (Light Detection and Ranging) collection and to interact with the talented individuals that make these large-scale data collections a reality.

As we approached our aircraft, the pilot, Sergi, welcomed us aboard. He instinctively reminded us to watch our step as the little black box in the middle of the floor was likely the most valuable piece of equipment onboard (ourselves included). Sergi filled us in on the basic specs of the aircraft, the equipment on board, and (of course) he once again assured us that he was one of the best in the business and that we were in for a smooth ride. By the end of the flight, I was still a little green, but true to his word it was a remarkably pleasant flight.

A few minutes later we were over 5,000 feet in the sky. This is when the magnitude of our project really started to set in. As I looked out the windows, I could see what seemed like forever in every direction. The entirety of Fargo/Moorhead completely in view and the rivers and lakes traceable with the naked eye. But the reality was, what we were seeing was only a fraction of the amount of land that we would soon be able to view and explore from the comfort of our offices. 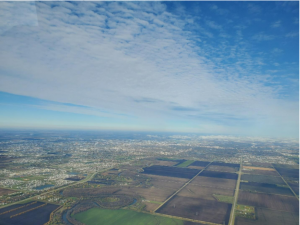 You see, the team we were working with had a “simple” task: to scan the Minnesota side of the Red River Basin with their LiDAR sensors and deliver their data to us in a resolution that had never before been seen in our region. I say simple tasks, but the truth of the matter is that I cannot fully understand how the LiDAR company makes the process seem simple. When in reality, their work relied heavily on the skill and expertise they brought to the table.

Now that the last of their flights have been flown in the region, the LiDAR vendor has started the month-long process of calibrating and classifying the LiDAR data. Meanwhile it has been the task of myself and the brains of the team, Grit, to prepare to process the data that they will deliver in the near future. We have commitments that go far beyond our office- to the people who live around those very rivers, fields and cities we saw during our flight, from Lake Traverse to the Canadian border and everything in between. We have the privilege of working with many organizations that are relying on us to provide crucial data and products that will help them form better policies to thwart spring flooding in our towns and cities, develop practices that will help farmers grow more by using less, and help protect and restore the waters that we not only rely on but also cherish as one of our most valuable resources. 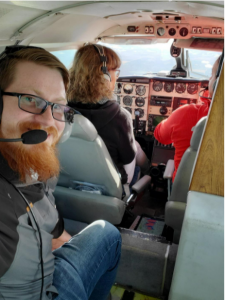 As we began our descent from the air, reality started to set in. This seemingly infinite expanse (which at first glance seemed to pose, for our purposes, an impossible task) would in a very short time be condensed onto a handful of hard drives. With this data in hand we will be able to do our work, such as mapping contours and landforms, in a matter of days. This once would have taken a much larger team years to survey from the ground. But perhaps more impressive, the quality and magnitude of the data we will be exploring allows us to do things that most might have never even imagined possible before- such as the ability to trace every stream and river in the region with the click of a button, and with a little math be able to calculate exactly where flooding might occur, or where runoff and erosion might pose the largest threat to our soils and waters.

It is amazing to think that just a few “simple” flights (and a little work behind the scenes) have the potential to help positively shape not only our landscape, but many, many lives.